Pre-Xmas sale save 25% with code FESTIVE
press Enter to search Showing all results: No products found.

They are organic compounds that are produced by a variety of plants, including cannabis. These compounds give plants their distinctive smells and can also have other effects on the human body. For example, some terpenes are known to have anti-inflammatory properties. Others may help to improve mood or relieve pain. The specific effects of each terpene depend on its chemical structure. However, scientists believe that terpenes may work together with cannabinoids like THC and CBD to produce what is known as the “entourage effect.” This means that the various compounds in cannabis can amplify each other’s effects, resulting in a more potent experience for the user. As cannabis research continues, we are likely to learn more about the role of terpenes in shaping the plant’s effects on the human body.

If we compare cannabis to wine, terpenes would be the drinking notes – the subtle aromas and tastes which give each strain its unique characteristics. However, unlike wine notes, terpenes have the additional benefit of affecting your visceral (i.e. physical) experience of Cannabis. Terpenes can make you feel relaxed, energised and everything in between.

What are the different terpenes?

Anyone that loves a walk in a Pine forest will recognise this terpene. Alpha-pinene is a terpene that is found in the essential oils of many plants, including pine trees. It is also a major component of turpentine. When inhaled, alpha-pinene has been shown to improve airflow to the lungs and help clear mucus from the airways. Additionally, it has anti-inflammatory and antimicrobial properties. Alpha-pinene can also be used as an insecticide and repellent. When applied topically, it can help to relieve pain and inflammation. Thanks to its many therapeutic benefits, alpha-pinene is an incredibly versatile compound that can be used in a wide range of treatments.

Myrcene is a terpene that is commonly found in Cannabis. It is also found in other plants such as mangoes, lemongrass, and thyme. Myrcene has a fruity, musky scent and is responsible for the Relaxing effect of some Indica strains of Cannabis. It is thought to be the most abundant terpene in the world. Myrcene has been shown to have antibiotic, antifungal, and anti-inflammatory properties. It is also a potent sedative, and studies have shown that it can reduce anxiety and depression. While more research is needed to fully understand the potential therapeutic benefits of myrcene, it shows promise as a natural treatment for a variety of conditions. Relaxing on your favourite myrcene-rich strain of Cannabis just might be the answer to your sleep problems.

Linalool is a naturally occurring terpene found in many flowers and spices, including lavender, coriander, and rosewood. Its potent floral aroma has made it a popular ingredient in perfumes and cosmetics. In addition to its pleasant smell, linalool is also known for its medicinal properties. It has been shown to possess anti-anxiety and anti-inflammatory effects. What’s more, linalool is thought to be one of the most effective terpenes at fighting cancer cells. As research on this potential therapeutic agent continues, linalool may someday play a role in the treatment of a wide variety of disorders.

Limonene is a colourless liquid hydrocarbon classified as a monoterpene. It is a major component in the oils of citrus fruits such as lemons, oranges, and limes. In addition to its obvious citrus scent, limonene is also used in perfumery, cosmetics, and cleaning products for its fragrance. It is also used as a food additive and flavouring agent. Studies have shown that limonene has numerous health benefits, including anti-inflammatory and anticancer properties. In addition, limonene has been shown to boost the immune system, improve digestion, and promote weight loss. Given its wide range of benefits, it is no wonder that limonene has become a popular ingredient in many natural health products.

Caryophyllene is a terpene that is found in a variety of plants, including black pepper, cloves, and hops. This terpene has a woody, spicy aroma and is also found in several essential oils. Caryophyllene is known for its anti-inflammatory and analgesic properties, making it a popular ingredient in topical treatments for pain relief. In addition, caryophyllene is effective in treating anxiety and depression. This terpene binds to the CB2 receptor, which is responsible for regulating the immune system.

How can I take terpenes?

The truth is (unless you don’t eat fruits, vegetables, herbs and spices) you will be ingesting small amounts of terpenes on a daily basis through food. The easiest way to further boost your terpene intake is through vaporisation in a CBD vape pen or traditional aromatherapy. Aromatherapy has been used successfully for centuries and scientists are now finding our sense of taste and smell may be more closely linked to our emotional state than previously thought. So the next time you catch a whiff of your favourite fragrance, take a moment to breathe it in and enjoy the mood-boosting benefits!

So there you have it, if the question “what are terpenes” keeps popping up, just know this. Terpenes are incredibly influential to the CBD experience, affecting the flavour and aroma of each CBD product and the health benefits they can bring to the body. They are natural compounds found in several plants but are especially present in the cannabis and hemp plants that we use to create our HighKind CBD products. Take a look at terpene-infused CBD Vape products today. 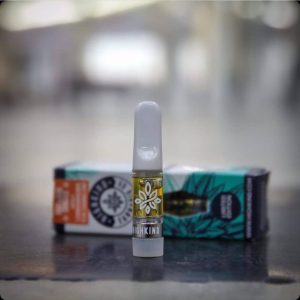